Based on the established VR forklift truck tests in the category of electric forklifts up to 3.5 tonnes over the last 24 months, the vehicle with the best overall score was awarded the "VR Forklift Champion". In the forklift truck test, the RX 20-16/P led the field in this category with an overall score of 1.4 (very good) and thus won the coveted prize, which was awarded by VR for the first time this year.

The electric four-wheel counterbalanced forklift RX 20-16P/Li-Ion has a load capacity of 1.6 tonnes, with a load centre of 500 millimetres. The electric truck is powered by a 48-volt 625-ah lithium-ion battery. The performance and safety of the STILL RX 20 electric truck were tested by the experts at VerkehrsRundschau in a comprehensive truck test. The truck scored particularly well with its excellent field of vision thanks to the unique mast concept: "When driving, even with a load, you have a perfectly clear view past and over the mast," was the conclusion of the team that carried out the tests on site. The steering also proved pleasing: "It reacts precisely and without delays to all commands." When it came to testing the handling performance, expectations were finally exceeded, as is emphasised by the following lines from the test report: "In sprint mode, we experience electric power par excellence. Our drivers instantly achieved record lap times, which we have not yet been able to measure with any electric forklift. Remarkable 130 transported pallets per hour were recorded at the end of the test.”


Two reasons for joy at the VR Awards Ceremony

The VerkehrsRundschau awards ceremony takes place annually within the festive framework of the VerkehrsRundschau gala. In view of the current situation, this year the awards were presented within a smaller, regional reception in accordance with the usual precautionary measures. In addition to the new award categories such as the Forklift Champion, the ceremony also included the coveted VS Image Award. With the Image Awards, Springer Fachmedien München GmbH and the publishing house Heinrich Vogel honour the most popular brands in the industry every year. The Image Awards are based on an independent survey conducted by a market research institute on behalf of VerkehrsRundschau. This year STILL won silver in the image ranking and was placed on the winner's podium once more.


Background to the VR forklift test

For many years, the VerkehrsRundschau (VR) has been conducting practical tests of forklift trucks. The VR forklift test consists of two parts that test not only the performance but also the user-friendliness of the vehicles. The three test drivers, all full-time logisticians with at least 20 years of forklift experience, test the trucks on a standardised course using 17 criteria that have an impact on handling performance. The dynamic test on the course also provides information on the energy consumption and performance capacity of the trucks. The test is rounded off by a simulated loading and unloading of a semi-trailer with a total of 32 Euro pallets and a test weight of 800 kilograms. 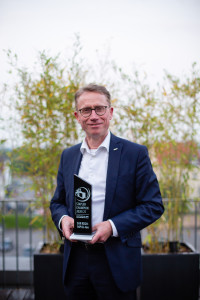