Choose a different language to see content for your location:

The French retail company Carrefour relies on a fleet of 137 STILL hydrogen powered warehouse trucks in its new logistics base in Vendin-Le-Vieil, Northern France, which is the largest use of fuel cell powered stacker trucks anywhere in Europe so far.

A "movingimage" video is embedded at this point.

Unfortunately, we cannot show you this feature immediately due to your tracking settings. To use this feature, please allow embedding this third party service.

Through the EU-sponsored project HyLIFT-EUROPE, implemented in two phases, the partners set a milestone in using hydrogen as an alternative energy source and show that the technology is proven in hard everyday logistics work.

Carrefour Supply Chain, the logistics subsidiary of the French retailer Carrefour, celebrated the operation of Europe’s largest fleet of fuel cell stacker trucks during the final project completion event in Vendin-Le-Vieil, France, on 22 November. As project partner for the intralogistics operations, STILL equipped the EU-sponsored project with a total of 137 hydrogen powered fuel cell warehouse trucks: 36 FM-X reach trucks, 78 CX-S horizontal order-pickers, 6 EXD-S two-storey high-lift trucks and 17 EXU-S low-platform trucks. Björn Grünke, Energy Systems Product Manager for STILL, explains: “We are proud that we have successfully installed the biggest fleet of hydrogen powered industrial trucks anywhere in Europe up to now. STILL has regularly implemented hydrogen projects with a variety of truck types since 2013. We aim to offer customers the solution that is best for them. The hydrogen powered fuel cell is a technology that offers many advantages in this respect, e.g. maximum availability.”

Carrefour Supply Chain is composed of 60 warehouses. From the new logistics base Carrefour delivers to around 360 branches of various sizes in Northern France – from a superstore to a local shopping centre. Between 14,000 and 16,000 different articles – mainly beverages, foodstuffs and drugstore items - are stored on pallets on an area of 58,000 m2 here in the logistics base. Logistics centre employees, working two to three shifts, order-pick full and mixed pallets with goods for the individual branches. That’s why truck availability has top priority. Fast, easy truck refuelling is an advantage of hydrogen as an energy source: the truck’s fuel cell system is refilled in only three minutes and has enough energy for an average operating time of up to 6 – 8 hours. The hydrogen storage and compressor station is located outdoors besides the building. From there hydrogen is distributed through pipes to a total of three refuelling dispensers installed at various strategic positions in the building.

Like the construction of the site, the trucks were also delivered in two phases: STILL supplied the first 57 warehouse trucks into operation in September 2017, and another 80 trucks were supplied in January 2018. Carrefour’s site director Alain Audegond is enthusiastic about the performance and handling of the fuel cell trucks: “By using a hydrogen powered truck fleet we are able not only to reduce our C02 footprint but also to provide our staff with simplified, more ergonomically designed handling systems as a result of eliminating battery changing. The hydrogen refuelling station also has no need for an enclosed space, so we were able to install it directly alongside the ramps instead. Finally, we need fewer trucks overall, and no swap batteries and other battery-changing infrastructure for the fuel cell trucks.”

The project, which was coordinated by the Fuel Cells and Hydrogen Joint Undertaking (FCH JU) and by the consultancy Ludwig-Bölkow-System Technology, was implemented by Carrefour and STILL in conjunction with Air Liquide as the hydrogen technology supplier, and with Plug Power Europe, a leading supplier of industrial hydrogen and fuel cell products, as partner for the fuel cells. 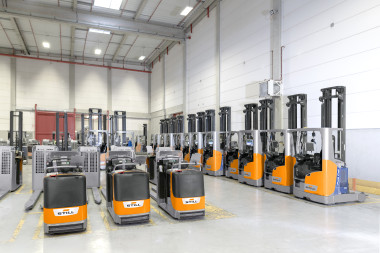 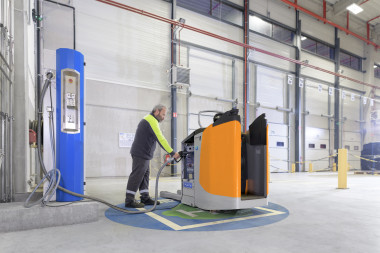 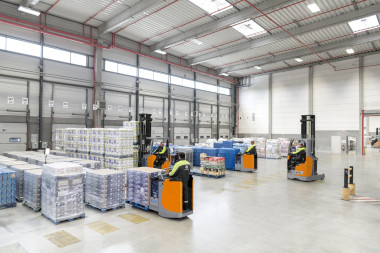